As I promised here is a detailed write-up on null humla conducted on Mastering Nmap Script Engine at Mumbai null chapter on 18 July 2015. The basic agenda of the session is to learn how to write Nmap Scripts from scratch.

Nmap has been playing an inevitable role in the security community over more than one and half decades. Though the project started as a simple network port scanner, it has been evolved into a massive toolset to do complete reconnaissance with a ton of impressive advanced techniques.

Nmap was first released on late September of 1997 by Gordon “Fyodor” Lyon. In the very early next year he founded insecure.org. The first version was written in C and included some basic scanning techniques. In March 1988, Renaud Deraison asked Fyodor to give him permission to use the code for one of the network scanner he was planning to develop. Fyodor gave him access and that tool was none other than what we call today as Nessus. By end of 1988, nmap was capable enough to have OS fingerprinting capabilities. The first version of nmap GUI called NmapFE GUI was released by April 1999.

Nmap further enhanced with timing options, and more scanning techniques such as window scan, ACK scan, and RPC scan, and also released windows version of nmap as well. In 2001, nmap introduced an interesting scanning technique called idle scanning, though it is practically difficult scenario. This uses pid to detect ports on the target machine by spoofing another system and there by hides original scanner’s IP address. In July 2002, Fyodor decided to leave his job at netscape/AOL and took nmap as his full time job. This made him add more features to nmap such as XML output, uptime detection, and OSX support. In the same year nmap was also got rewritten from C to C++.

In May 2006, Nmap guys started working on NSE as a part of Google summer of code. Post mid of same year, nmap released it’s first collection of NSE with 23 simple scripts like sshv1, ss2v2 detection, ident service enumeration, dns recursive call support detection etc. It also released 2nd Generation OS database that we can see with current nmap installations. May 2007, David Fifield joined Google summer code and further continued to work as co-maintainer for nmap. Fyodor and David together worked together and shared the important milestones of nmap available at http://nmap.org/book/history-future.html.

July 2007, the first version of Zenmap released. By 2008, nmap got evolved with more features that includes 41 scripts, 1,307 OS fingerprints, and 4,706 version detection signatures. Later they lauched nmap script documentation http://nmap.org/nsedoc. Ncat and ndiff were added to nmap list by 2009. Nmap also made a milestone feature of identifying conflicker worm infections. The 2nd version of conflicker started blocking infected users from accessing nmap.org and insecure.org websites. Fyodor and team considered this as great complement though. Google summer of code in august 2009 came up with nping, ncrack and also improvements in NSE, ncap and zenmap. August 2010, favicon project started, this is available at http://nmap.org/favicon. In 2011, nmap launched sectools.org., and nmap got evolved with 3,572 OS fingerprints, 8,165 version detection, 348 NSE scripts by end of 2012. And it is still growing. 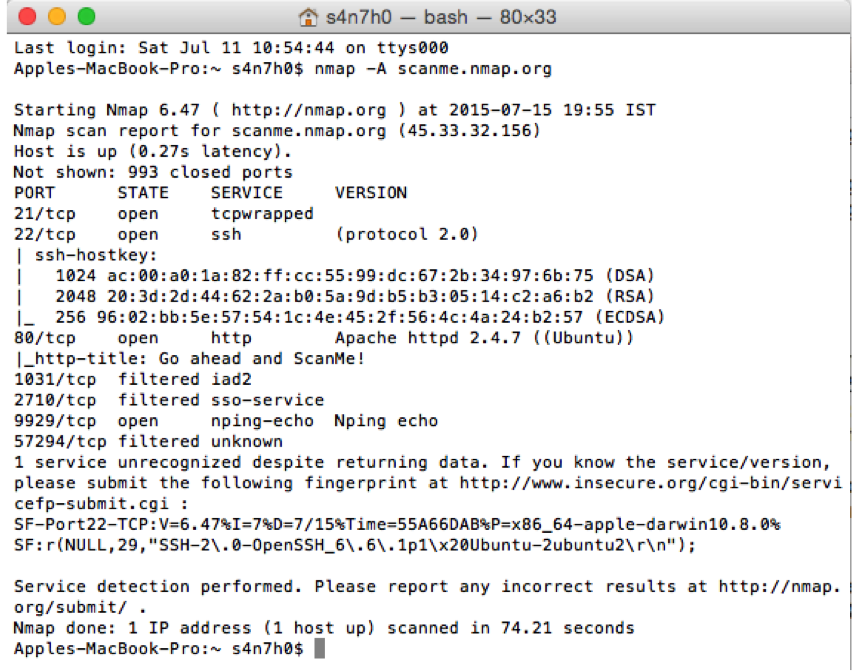 Nmap currently has 498 scripts, 114 libraries, and 14 categories. That doesn’t mean that nmap will run all these scripts against target IP addresses. Scripts are conditionally triggered, i.e., a specific and defined condition needs to be triggered to execute the script. These conditions are also written within each script. Nmap Scripts are located in the nmap installation directory itself along with other supporting files.

Every script follows certain naming conventions for convenient usage. For eg.: a script to bruteforce http service is named as "http-brute.nse"; another script to identify a vulnerability with specific CVE number in mysql will be named as "mysql-vuln-CVE2015-1234.nse". This makes pentesters easy to find right script for their scans. So when you write scripts, it’s good practice to follow the same naming conventions.

It’s easy to learn Lua language. People who code in python can get it’s syntax and semantics quite quickly. Like python, LUA is another scripting language that doesn’t bother about curly braces { }. Each modules, sections or chunks works based on indentation.

Lua can be installed in any linux machine using following command

A windows installer is available from here  https://code.google.com/p/luaforwindows/

Like python, LUA also supports working with interactive shell. If you want to exit from the interactive shell, you can type control characters (Ctrl+Z in windows, Ctrl+D in linux), or use os.exit() function.

It is also possible to execute single line LUA code using –e option like below.

If you want a program file (e.g.: filename.lua), you can call lua filename.lua directly from the command prompt. If you want to execute one LUA program, and get into LUA interactive shell instead of exiting into normal terminal, you could use –i options.

LUA also supports arrays like other languages. An array can be defined as arrayname = {}. Following command will create an array automatically as arg to store command line arguments.

Lua uses io.read() and i.write() to do basic input and output operations. Like other programming languages, LUA also has conditional and looping statements.

Remember that LUA don’t have switch statement like other languages. If you want to quit from loop, you can use break statement.

When working with NSE, we would also need to create multiple functions to manage the code in well manner. Lua supports function very similar like other languages.

A long string in LUA is a special data type that helps in handling multi-line strings. For instance, if you want to deal with XML or HTML contents while executing NSE scripts, long string will be suitable to do this. Long String can be defined in following two ways.

Lua5.2 supports escape sequence character \z. This escapes all subsequent characters (in following case, the new line characters) in the string until it finds the next first non-space character.

Lua has a series of functions to handle string. These functions are highly required while parsing scans results and printing the output in desired form.

If you want to use type conversions, this can be done using tonumber() and tostring() functions. Many times, you would need to concatenate string with number or vice versa for the result printing from NSE scans. This can be done using double dots (..) operator as shown examples below.

Lua doesn’t have many data structures. The only one, indeed powerful data structure it supports it Table. Table is an associative array representation, but with definable index values. It means arrays can have numeric indexes only. But tables can have indexes of any types except nil value. So types are not considered as variables; they are objects.

Remember calling mytable.size is same as mytable[‘size’]. Following are the important function to deal with table.

You can use ipair() function to iterate over a table to handle the elements stored in it.

Consider a scenario: Most of the time, we would need to run nikto scans on every web servers identified. This could be a hectic job running nikto individually on every web ports, especially when we are engaged with a huge rage of IP addresses.

Following code will run nikto scan on every web ports automatically and save the results in html format. It also has an option display that allows you to turn on or off the nikto scan result in nmap scan window. 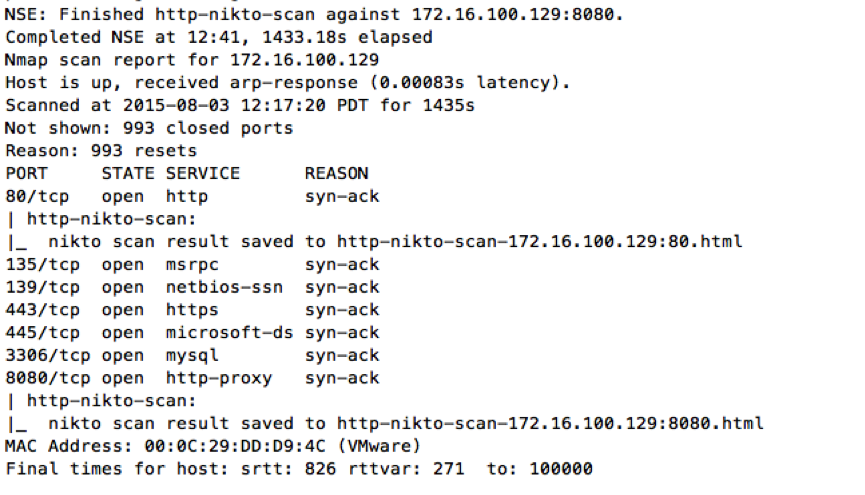 In the following example, I have used –datadir . to specify current directory and the debugging option –d.

Once the final script is built, you will need to run –script-updatedb command to update the script database. There’s always an option to run wireshark behind and see how script runs. However, it is also possible to run scan with –script-trace option.